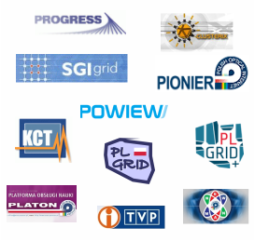 ACC Cyfronet AGH attaches great significance to international cooperation. Center staff members participate in the management bodies of IT organizations as well as in program and organization committees of scientific conferences.

ACC Cyfronet AGH is involved in numerous projects co-financed by the EU funds and the Polish government. Research conducted in Cyfronet focus on grid and cloud environments, programming paradigms, research portals, efficient use of computing and storage resources, as well as on reconfigurable FPGA and GPGPU computing systems. 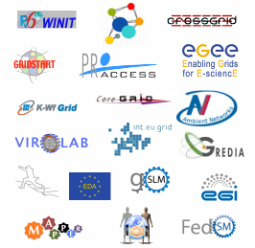 ACC Cyfronet AGH – in the scope of development of IT systems – since many years has been working with the Department of Computer Science AGH and the IFJ PAN in Krakow in creating an environment for large-scale computations for particle physics. The cooperation of these three institutions has resulted in taking by Cyfronet the role of the coordinator of the CrossGrid project (2002-2005, http://www.eu-crossgrid.org/), in which 21 partners from 11 countries were involved and whose aim was to implement and deploy a set of interactive applications in a distributed computing environment. Success of CrossGrid, as well as the contacts and the experience gained in this project enabled Cyfronet to participate in many other projects during the 6-th and 7-th Framework Programme. Thanks to these projects ACC Cyfronet AGH, Department of Computer Science AGH and IFJ PAN significantly expanded research topics and increased the number of foreign partners.

In 2009-2012 Cyfronet was the coordinator of the PL-Grid project, whose aim was to build the Polish Computational Infrastructure (PLGrid Infrastructure). Next, the Centre coordinated the PLGrid Plus (2011-2014) and PLGrid NG (2014-2015) projects, which aimed a.o. at continued development of the infrastructure and preparation of dedicated domain-specific services for groups of researchers representing many different disciplines. At present, Cyfronet is recognized as a National Center of Competence in the field of distributed computing infrastructures. This was confirmed by the new grant for ACC Cyfronet AGH for the implementation of the new project - PLGrid Core (2014-2015). It aims at further, significant extension of the PLGrid Infrastructure resources, especially in ACC Cyfronet AGH, with particular emphasis on grid technologies, cloud computing and platforms supporting computations on big data. 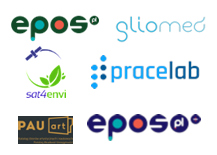 Since 2016, Cyfronet has participated and still participates in several subsequent national projects. It is worth mentioning here those implemented under the Intelligent Development Operational Program: EPOS-PL and EPOS PL +. The aim of the first of them is to build a national research infrastructure in the field of Earth sciences and to integrate it with international databases and services implemented under the European Plate Observing System (EPOS) program. The second project will increase the functionalities of the EPOS-PL research infrastructure. One should also not forget about the PRACE-LAB project, which aims to prepare computing infrastructure and data storage services for the PRACE project within several dedicated laboratories, and about the Gliomed project dealing with cancer diagnostics (implemented as part of the strategic research and development program "Prevention and treatment of civilization diseases - STRATEGMED").

International projects in which Cyfronet is involved after 2016 are co-financed mainly from the European Union "Horizon 2020" program. Among them, it is worth mentioning the series of PRACE projects, the aim of which is, inter alia, implementation of new solutions and maintenance of the operability of the PRACE environment in the area of European HPC computing infrastructures. Another interesting series of projects is EOSC (EOSCpilot, EOSC-hub, EOSC-Synergy, EOSC Enhance) - their task is to launch a production infrastructure for open science in Europe (EOSC - European Open Science Cloud), and then maintain and develop this infrastructure. Another very important initiative is Sano, whose goal is to create a computational medicine center in Krakow. The Center will be the main driver of European progress in this fast-growing sector, developing advanced engineering methods for the prevention, diagnosis and treatment of disease and meeting the global need for radically improved healthcare systems.

Cooperation of ACK Cyfronet AGH and Department of Computer Science AGH also contributed to the establishment of the DICE (Distributed Computing Environments) Team, which consists of scientists and IT experts working in these institutions in the research projects carried out in Cyfronet. This team specializes in large-scale distributed computing and web, grid and cloud technologies. The team develops new methods, tools and computing environments and apply these solutions to the problems from different fields of science, healthcare and industry.

Cyfronet participation in activities and projects at an international or national level brought many other benefits:

Participation in projects financed by the European Union is considered an essential part of scientific activity of Cyfronet, and more broadly – of Polish scientific community, due to the benefits of technology transfer, the development of international cooperation and education of young staff.