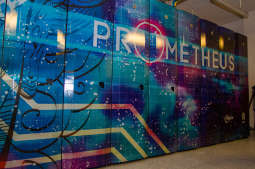 One of the main tasks of ACC Cyfronet AGH is to provide computing power, mass storage system and specialized software for the research community. Due to the technological progress, Centers' resources are changing over time, being upgraded or replaced by a new hardware. To view the list of currently installed High Performance Computers, please visit "High Performance Computers" page (in Polish).

In the process of developing its computing resources, Cyfronet tries to choose such an architecture of HPC systems, which best fits wide requirements of users and research fields. From this concept, a universal computing system – Zeus – was born. Zeus is a heterogeneous computing cluster, which contains different hardware groups:

Zeus has been the fastest Polish supercomputer for over three years, according to the TOP500 supercomputers list. But on April 27, 2015 was solemnly opened a supercomputer four times more powerful than Zeus – Prometheus, named after the Greek god who gave fire to humankind. Packing 1.7 PFlops of peak computational performance, the HP-built machine is the most powerful supercomputer in the history of Poland and for now the world's largest installation of HP Apollo 8000 servers.

The machine houses 1,728 HP Apollo 8000 InfiniBand-connected servers inside 15 racks. The system contains a total of 41,472 Intel Haswell-EP cores and 216 TB DDR4 memory, with two file systems providing a total capacity of 10 PB. Keeping all those servers from overheating is achieved trough the use of direct water cooling on both processors and memory modules. With this innovative approach, Prometheus is held up as one of the most energy-efficient computers in its class.

In October 2015, Prometheus was extended by additional 5 racks. In total, after enlargement, it contains 2,160 servers and 72 special servers with GPGPU cards installed. Its total computing power has increased to 2.65 PFlops. Prometheus has been listed at 39th position in the November 2015 edition of the TOP500 list. This is the highest position in the history taken by a Polish supercomputer.

In 2021, the Ares supercomputer was launched, with the theoretical computing power of 3510 TeraFlops of the CPU part, and of over 500 TFlops of the GPU part. Ares is also supported by a disk system with the capacity of over 11 PB. The InfiniBand EDR type network is used for data transmission. The supercomputer has 37,824 computing cores and 147.7 TB of RAM. Ares is built of computing servers with Intel processors (Xeon Platinum model).

Athena, installed in Cyfronet in 2021, achieves the theoretical computing power of over 7.7 PetaFlops (7709 TeraFlops), which gave the machine 105th place on the TOP500 list in June 2022. Athena is to provide the Polish scientific community and the economy with the most modern computing resources based on processors and the latest generation GPGPU accelerators with the necessary data storage subsystem based on very fast flash memory. Athena's configuration includes: 48 servers with AMD EPYC processors and 1 TB of RAM (6144 CPU compute cores in total) and 384 NVIDIA A100 GPGPU cards.

Besides, a Windows cluster Platon U3 is available. All other computing systems are running the Linux operating system. All computers are equipped with high-speed InfiniBand or Ethernet networks and have fast access to mass storage system. Currently, the total computing power of all Cyfronet systems reaches almost 15 PFlops, total disc capacity – 43 PB and tape capacity – 25 PB.