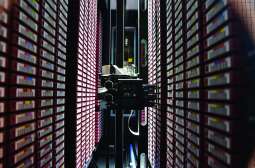 ACC Cyfronet AGH provides its users with a wide portfolio of services related to securing information stored in a digital form. In addition to advanced technological solutions such as communication networks dedicated to storage systems, modern disk arrays or hardware file servers, the Centre also performs conventional backup-archiving services, based on magnetic media. Contrary to the expectations of the inevitable end of solutions using data storage on magnetic tapes, this technology is constantly evolving, and offers in successive generations not only the increasing capacity of the media, but also significantly better capacities and mechanisms supporting the safety and effectiveness of the information storage (e.g. data encrypting and compressing algorithms, which are embedded in the tape drives).

Cyfronet has currently three tape libraries having in total 6 thousand slots for LTO magnetic tape drives and 36 drives of the III, IV, V and VI generation. A single LTO-6 magnetic medium has a physical capacity of 2.5 TB and allows recording at the speed up to 160 MB/s, which theoretically allows the storage of almost 15 PB of uncompressed data in tape libraries. Described resources are used for performing current backup and archive of important information resources of the Centre's users.

Backup is performed on the active data − that might be currently in use − through a replication process from the source location to a separate, isolated destination. The ideal backup procedure ensures consistency of the source and backup data, both at the level of a single object (a file located on a hard drive), and in the case of complex IT systems, such as database or mail servers as well as virtual environments. Physically, the cloning process is usually done by copying the source data from the backup client disk to disk/tape resources of the target backup server, using dedicated or shared access medium, such as Ethernet or SAN.

The purpose of an archive is to ensure security of unused data and to release occupied storage resources. In contrast to the backup, the archive is performed once, by the migration of the data from the source location to the destination. Since this is a migration process, the data from the source is removed, allowing the release of the disk resource.

ACC Cyfronet AGH provides a wide range of backup services, addressed directly to users, and operating without their interaction. Among those at the disposal of users, there are ones based on FTP, NFS and SCP network protocols, acting within the dedicated backup servers. These machines provide backup solutions for users, allowing them to direct access to the backup data. It is up to users to decide which data they treat as a backup and which as archives.

For the special cases Cyfronet offers users a dedicated backup-archive service called the Universal Archiving. Within this service, the user is given a dedicated disk space, protected at many levels. User's data in this case is protected by a distributed disk array equipped with disk resources protected by RAID-6 level functionality and additionally secured by a system of hierarchical data storage HSM. To advance the data safety even more, users' backup data are additionally protected by geographical data replication to the associated units. Last but not least, users of Universal Archiving system can further increase their data safety by encrypting their data with use of certificates.